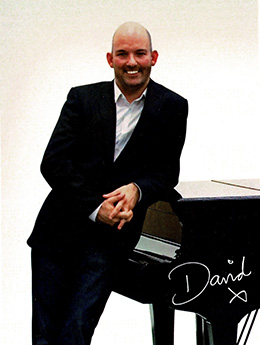 Born in North Yorkshire, David is widely regarded as one of the foremost dance accompanists in the UK. In a career spanning over 25 years, he has worked with some of the finest and most respected dancers, teachers and choreographers of his generation. Based in his home County, David is currently engaged as both company and school accompanist with Northern Ballet, additionally for the Northern School of Contemporary Dance, as well as the Royal Ballet School's Associates programme.

David's work with leading vocational centres includes Central School of Ballet, Elmhurst School for Dance, Liverpool Institute of Performing Arts, SLP College and Pineapple Dance Studios. He is a regular class and examination accompanist for the Royal Academy of Dance, Imperial Society and the British Ballet Organisation and has played for regional and national courses for these respected bodies. For the past decade, he has accompanied the world renowned Yorkshire Ballet Seminars under the direction of David Gayle MBE and Marguerite Porter MBE. Most recently, David was honoured to be asked to compose new music for the International Dance Teachers' Association Advanced Ballet Syllabus. He is passionate in his interest for dance, for working with teachers, professional performers and aspiring students.